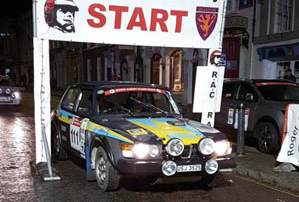 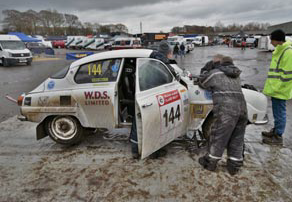 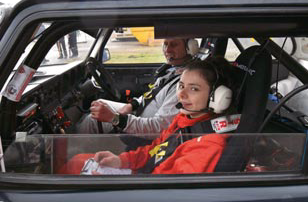 More drama than expected at the RAC for me this year, last minute problems with the gear linkage on the 96 meant I had to make a decision at the last gasp to take the 99 again.
This left me with a week to prepare the 99 for competition, fortunately the tyres bought for the 96 could be used and I had fitted its new four speed gearbox a few weeks earlier, so a complete service and check over and it was onto the trailer and away. In fact the 9-5 chase car probably had more work done to it prior to the rally!
Arriving at Brightwells in Leominster gave a chance to catch up with our friends from the Saab Historic Rally Team and all the cars sailed through scrutineering. Sadly, an accident on the first night stage, ended in the cancellation of stages one and two and so we took advantage of an early night.
Day two saw us into the Welsh forests and the rally got going properly. Heavy rain had left the roads pretty soft, and when we got onto them there were big ruts to contend with. I soon found out that greasy wet tarmac roads and gravel tyres don’t mix too well and a half spin on the Epynt ranges put us off the road for a few minutes until some spectators were able to haul us back on, with thankfully no damage. It was a long day, and as we finally loaded the car onto the trailer for the long haul North to Carlisle, fish and chips at Builth Wells lifted our spirits.
Five hours sleep and we were off again, a bit of tinker time with the car and a prospect of a day in Kielder soon had Shannon and I excited for the day ahead. Sadly Saturday was not to be our day. Earlier we had changed the washers on a slightly weeping fuel banjo, this simple fix had altered the height by a fraction which was enough to cause the throttle linkage to stick open in the first stage, we pulled over and effected a repair, but lost time in the process. As the day progressed the weather closed in and rain and fog caused some serious issues. As the second run throughs started there had been around three hundred cars before us, leaving some stages like driving across a quarry, eventually I was caught out on a right hander and drifted helplessly into a ditch. Again, luckily a soft landing and we were able to be pulled out, but more time was lost by the time we completed the stage.
As the day wore on into night, we were confronted by walls of fog, lights were next to useless and I relied on Shannon’s notes to give me a hint as to what was ahead, at one point I drove on just the sidelights, which gave me the edges of the road but not much more. On the second last stage of the day the inevitable happened, too fast into a hairpin with zero visibility and I braked straight off into a ditch again. We were recovered with a tug out and continue on to finish the stage and make the time control for the next, but sadly we tripped into two minutes over the maximum and were counted as OTL, and into Super Rally.

Sunday, back on our home ground in Scotland, and amazingly, the sun even made a brief appearance. A bit of dry weather seemed to improve our driving, and we started to feel things coming together. Apart from a puncture on one stage we had a trouble free day until the inevitable fog at night caused more slowing down. Earlier in the day I had replaced one set of front spots with some yellow fog lamps, which did give an improvement, but it would be braver men than me who would drive some of the stages at anything approaching flat out! Our chase crew of Mike and Joe kept us fuelled up in the middle of nowhere, and were always at hand with a chocolate bar and a drink.
The final day saw us back in Kielder for some of my favourite stages, although we very nearly didn’t make it at all. On the motorway section first thing in the morning an oil cooler pipe freed itself and sprayed most of the sump contents into the engine bay. Fortunately, I saw the warning light and pulled over sharply, just as the flames started licking out of the bonnet. A quick blast of the fire extinguisher put the fire out on the exhaust pipes, and fortunately Joe and Mike were behind us. Pipe replaced and oil filled and we were off again, making the time control with minutes to spare. Kielder stages are a real pleasure to drive and we had a good tussle with a Firenza as we caught him through the longer tests. Once again, the conditions running at the back made life uncomfortable, the roads were very badly cut up in places and it felt like driving across a ploughed field.
As the fog descended again we had a slow run through the last couple of stages and were happy to get to the finish line. A very tough rally this year, although as we reflected we realised that apart from fuel and tyres, not a single component had been replaced on the 99 which ran perfectly apart from a couple of minor glitches. Due to the vagaries of the timing systems our overall time looked pretty grim, but we consoled ourselves that we had driven every stage and made every checkpoint, and many cars who had beaten us had missed (often multiple) stages due to mechanical problems. The new gearbox with type 4 primaries completely transformed the drive, and the addition this year of a rear anti roll bar, have made the 99 a real pleasure to drive, even in difficult conditions.